Like in a fairy’s tale, the Dominican wasp slept in the specimen archive of the Smithsonian Institution National Museum of Natural History, until it was awakened and described by the Brazilian entomologist Bernardo Santos.

The specialist presented the characteristics of an unknown species to the science that studies all insects, and added it to the long list of endemic species that live and belong to Dominican Republic.

With its translucent wings and its body covered with blackish and white strips and spots, the wasp native to the Eastern region self-enlightens the new geographical limits where the Nesolinoceras parasitoid wasps live in the Caribbean.

About the research study

Bernardo Santos, Ph.D. candidate at the American Museum of Natural History Richard Gilder Graduate School, performed an investigation on the wasp samples collected in Dominican Republic back in 2008, as a side-by study to his doctoral thesis on the evolution and classification of a group of parasitoid wasps, which include Nesolinoceras.

Since then, the wasp samples today described as new species were in the undocumented materials archive of the museum. “I was studying the collection in Washington D.C., and found specimens of the new species. I immediately recognized it as a new species and decided to write a report to describe it”, said Santos on the research he started back in October of 2014.

On May 11, 2016, American Museum Novitates of the American Museum of Natural History published the redescription of the anatomy and geographical distribution of a species of wasps considered to be endemic to Cuba. This was how Santos established the new characteristics of a genus, redescribed and expended the territorial distribution of Nesolinoceras ornatipennis, and described the Dominican wasp.

“Nesolinoceras was convenient because it had only one previously known species. Therefore, it was easy to determine that the species I had in hands was new. I only needed to compare it to one other species, which occurs in Cuba and other Caribbean islands”, explained the entomologist from Vitória, in the southeastern region of Brazil.

The Brazilian scientist distributed these species along the Caribbean, giving the wasps new geographical locations, which enriches locals and the international community of newly discover scientific facts.

La luz brillante has blackish, reddish and white spots and strips on its thorax, abdomen and hind, easily differenced from the red and yellow Nesolinoceras ornatipennis, which could be found in Cuba, Bahamas and Cayman Island. According to the study, its wings are longer than wider and slightly curved close to the apex.

“We have not observed N. laluzbrillante in the field, therefore we do not know what kind of insects they feed on, what kind of habitat they prefer, etc. For the other species, N. ornatipennis, some of this information is available. Further research on Nesolinoceras will hopefully elucidate more aspects of the biology of N. laluzbrillante”, Santos explained. 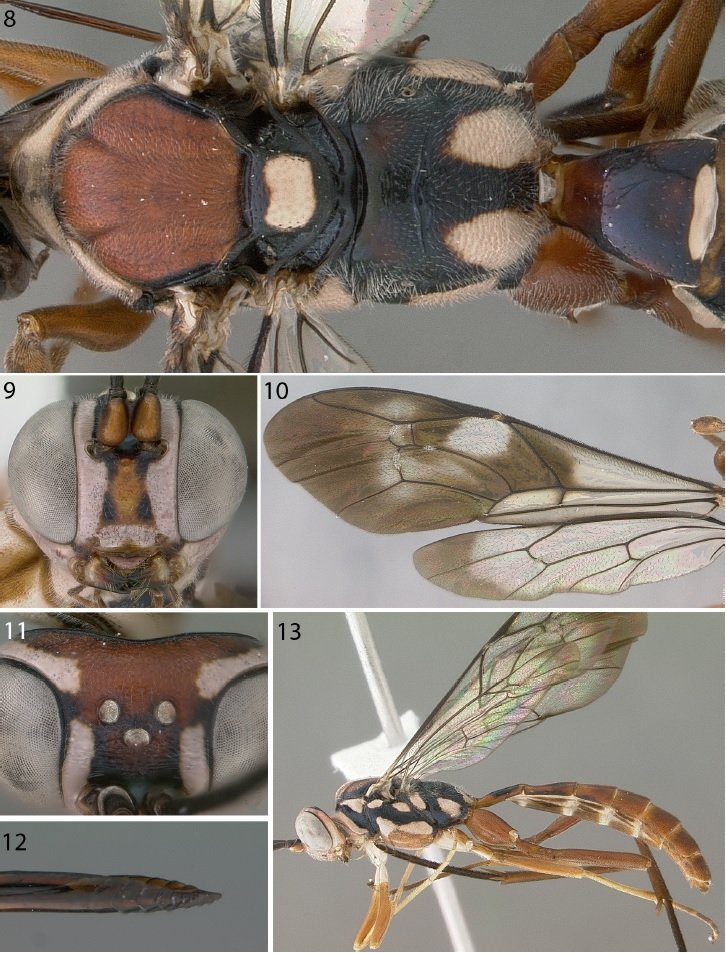 According to the scientist, N. laluzbrillante is a parasitoid wasp, the type that practices parasitism to live and take advantage from a host. The wasp’s lifestyle could be considered a beneficial ecological service when used to control potential plague populations in some sorts of yields.

“They are insects that could be used as biological control agents in certain integrated pest management systems. It reduces the necessity of pesticides that, at the same time, helps improve environmental quality and people’s health”, indicated Georgina De Moya Rodríguez, Dominican graduate in Environmental Studies and Agriscience from the State University of Michigan.

De Moya Rodríguez explained parasitoid wasp take another insect as a host to shelter and grow its eggs that, once hatched, feed on the host and eliminate it.

What about the name?

La luz brillante has been controversial. At least that is what the Dominican biologist Sixto J. Incháustegui shared after he questioned the name given to the new species with a group of colleagues, as they read a local news print about the study. “It’s not common to see a species be named like this, but it meets all the standards. In theory, the new name of a species could be related or refer to almost anything, as long as it is spelled in Latin characters and written according to the international rules set by the zoological nomenclature”, he indicated.

According to the International Commission of Zoological Nomenclature, the code establishes that each scientist has the faculty to name the new species in Latin, regardless of the scientist’s linguistic origins: genus or family type is the generic name goes in front with the first letter in upper case, and the assigned or specific name is written afterwards in lower case, all in italic format.

Santos made a new mold. He chose a group of sixth-graders from the Washington Heights Expeditionary Learning School (WHEELS) to name the wasp. Professor Sarah Rosenblum’s sciences students had the opportunity to do and be part of science’s history.

“I chose to work with the students in Washington Heights because I thought it would be a great opportunity to educate them about the importance of biodiversity research, how we are still discovering so many new species, and how much endangered are the environments where these species live”, commented the Brazilian entomologist, who is an Uptown Manhattan resident.

In one of the neighborhoods which has most Dominican heritage, Santos conducted two sessions with various groups of science students from the school, in which he spoke about nature, how the process of describing species took place and he presented the species to be named. Each student had the opportunity to suggest a name, that later was subject to a voting process upon the entire class. According to news publications, the students opt for this name because of the effect light causes when it reflects on the wasp’s wings.

Dominican Wasp Species to be Described

The research study, named Generic Redefinition and new species of Nesolinoceras Ashmead (Hymenoptera, Ichneumonidae, Cryptinae), opens doors for new research to take place. Under the subtitle Species Inquirenda, the scientist Bernardo Santos exposed data and the anatomy characteristics of a male specimen collected in Dominican Republic, similar to N. ornatipennis and N. laluzbrillante, that does not belong to either one of them.

“The specimen was collected in 1976 and it remained unidentified in the collection until I found it. It was archived at the Florida State Collection of Arthropods, and the collector was a certain R.E. Woodruff. The collector only stated that the location was ‘21 km. North of Cabo Rojo’”, the specialist said.

Santos indicated that it could be a hybrid, a member of a new species or a geographical variation of La luz brillante. “To answer that, we need to find more than a single specimen; hopefully further sampling programs in the Dominican Republic will reveal more specimens and allow for a more complete study”, he commented.

Word on the Street

Edwin Desamour, 44, father of four, dean at Stetson Junior High School and radio host for the family show The Wall.